During the May Day holiday, the ancient culture street scenic area plans to launch a series of cultural tour activities, which are divided into three parts: the “search for the ancient and ask for the ancient” customs clearance document punch card, the Centennial theater series performance, and the sock alley cultural market

Tiktok street daily attendance is a new way of playing a new type of tourism. Based on the past excellent tourist routes,

is designed to introduce a new batch of new tourism formats, such as “asking for the ancient times”, and the daily attendance of the customs clearance documents. Visitors can directly collect the “Tong Guanwen’s” from the ancient culture street, or get the appointment on the designated points by shaking the line, and then start a cultural journey on self guided tours according to the guide of the documents. Change for souvenirs. The 10 intangible cultural heritage and time-honored merchants participating in the activity also introduced exclusive preferential measures 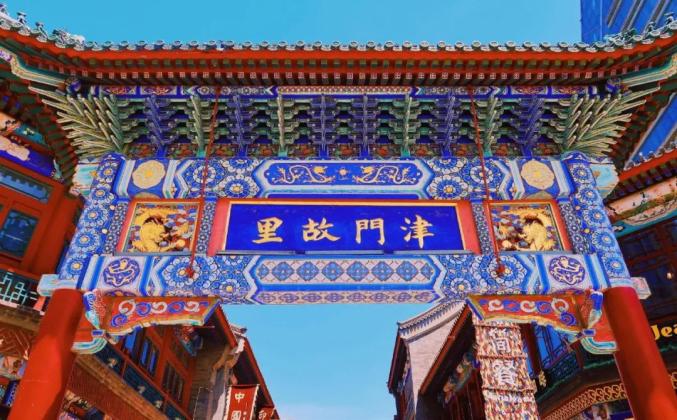 The newly decorated Minyuan square “happy Mahua theater” was put into trial operation during the May Day holiday. From April 30 to May 2, it continued to perform for three days, with the comedy “my son-in-law is ready to go”

In addition, Baiyin City of Gansu Province has brought a large-scale scene song and dance drama “on the Yellow River – colorful silver” to the people of Tianjin. It will be ceremoniously performed in the sunken square of Minyuan on the evening of May 1, so that the citizens can experience different customs

During the “May 1st” period, Jinwan Plaza will hold “smile” theme music party and delicious food market, so that music and delicious food will accompany you; In addition, we will also hold the “through the line of fire year hundred cities League spring competition”, Tianjin Papa bike children’s balance car fun competition and outdoor experience activities. All activities include “car lovers” of all ages, so that you can share parent-child time with your family 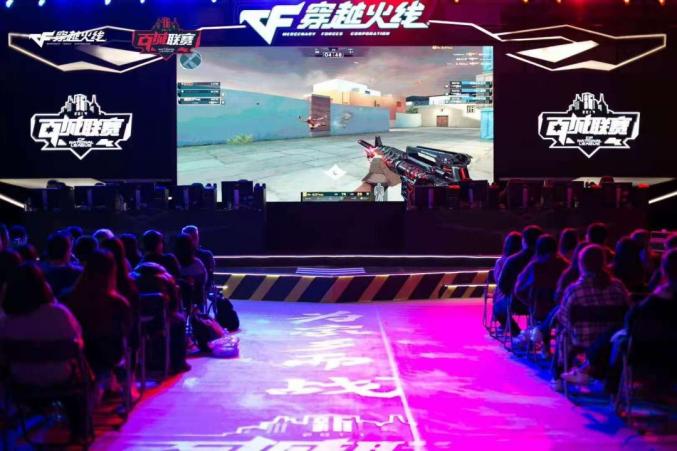 During the “May 1st” period, the “more Tianjin first Jinjie international trend culture festival” will be held in Jinjie copper coin. Through interactive experience activities such as market, graffiti, zunba dance, Jinmen top street dance competition, and the May 4th Youth Festival, it will create public welfare hot spots, show the brand IP image of scenic spots, and lead the new consumption fashion, Will be the favorite of energetic young people

The immersive experience activity held in Dangdang car of Jinjie will also be officially launched, which will let you wear Qipao to realize the journey, perform the different old Tianjin Customs together with the online celebrities, and open a different tourism experience

During the May Day holiday, a series of colorful Street activities will be held in Yifeng District, where citizens can enjoy authentic Italian food, classic Italian balcony opera, street bands with unique customs, cool and shocking light shows, and trendy and interesting interactive devices

”During the May Day period, we will invite bands with different themes to perform in the streets. The flower fairy band, Italian band, night Shanghai band, Guochao band and Han music Quartet will perform in turn in the free road, highlighting the integration of Italian culture and Chinese culture by combining Chinese and western music. At the same time, we will perform balcony opera in liberty road to perform a wonderful audio-visual feast and show the original Italian culture. On the main streets such as Marco Polo square, liberty road and National Road, there will also be Italian drama characters dressed in costumes to interact with the tourists in the streets, creating immersive experience and three-dimensional display of Italian life and Italian culture. In the square in front of the planning exhibition hall, a special music fountain is added and a magnificent lighting show is set up. You can watch performances, listen to music and enjoy beautiful scenery here. At Marco Polo square, the center of Yifeng District, we also invited domestic lighting teams to create a stunning naked eye 3D light and shadow show, presenting you with a visual feast of light and shadow, shape and color“ Liu zongjin, director of the Management Committee of Tianjin Haihe Italian style area, said

In addition, during the May Day period, the famous cross talk actors of Deyun society will also appear in Yifeng district to visit the streets, taste delicious food and watch performances

The Tianjin Branch of Deyun society is located in the theater, No. 95 Jianguo Road, Hebei District. The theater has about 290 people. Regular rotation is planned for the cast. Guo Degang, Yu Qian and other familiar cross talk actors from Deyun society will perform here

Tickets are sold online only. The general public can buy tickets for the performance of the Tianjin Branch of Deyun society through barley. The ticket price is basically the same as that of the branches that have already opened. The price ranges from 100 yuan to 380 yuan

In addition, in order to make the general public and tourists have a happy, safe and peaceful “May Day” holiday, Tianjin culture and Tourism Bureau has carefully planned and launched the “Tianjin may day” cultural and tourism activities menu “, which includes five sections:” Celebrating the centenary of the founding of the Communist Party “,” singing the praises of labor “,” tasting traditional culture “,” enjoying audio-visual feast “and” spring outing “, A total of more than 100 cultural and tourism activities. It is full of education and entertainment

Highlights: the xihuating hall is a 1:1 imitation of the layout and style of the xihuating hall in the Central South Sea of Beijing in the 1960s. It is divided into two courtyards. The front courtyard is restored to its original appearance. This is the place where Zhou Enlai meets Chinese and foreign guests. In the backyard, Zhou Enlai’s office, Deng Yingchao’s office and bedroom, living room, table tennis room and other places were restored. By means of visual display of real objects, the restoration display restores the working and living environment of Zhou Enlai and Deng Yingchao, and further enables the audience to appreciate their lofty character and spiritual demeanor of being diligent and loving the people, devoting themselves to public service and devoting themselves to their work

Through visiting the theme exhibition and watching 3D movies, we can find the red context, strengthen the public’s patriotic feelings, and enhance the sense of responsibility and mission with unique educational resources

Highlights: relying on the unique red resource advantages of the scenic spot, the patriotic education base of limutai carried out the patriotic red education experience activities of “no man’s land for thousands of miles” around the “no man’s land for thousands of miles” ruins. Combined with the 100th anniversary of the founding of the party, highlighting the theme of “clarifying the history of the party and strengthening the party construction”, the patriotic education base of limutai launched two red education theme routes of “re walking the path” and “walking into the fortress village of the Anti Japanese War” and tasted the activity of “remembering hardships and thinking sweetly”

Highlights: “praise the party’s centenary, never forget the original intention, pursue the dream of China.”. In order to celebrate the 100th anniversary of the founding of the Chinese Communist Party, review the glorious course of the party and praise the great achievements of the party, TEDA aircraft carrier will join hands with Pingjin Campaign Memorial Hall to build the aircraft carrier hangar into a new “red education position” and build a unique red carrier of patriotism education and national defense education for tourists and groups

Highlights: this year is the year of the ox. ruziniu, tuohuangniu and laohuangniu represent the spirit of hard work. On the occasion of May Day, we make a mosaic collage in the form of art to express our praise to the workers

Highlight: the combination of precious historical materials and restoration scenes. The awakening society was a progressive youth group formed in the May 4th movement, among which Zhou Enlai, Ma Jun, Liu Qingyang, Deng Yingchao and Guo Longzhen were the backbone of Tianjin at that time. The commune members broke through the feudal shackles and united to fight together. They studied new ideas, explored the truth of saving the country and the people, and actively participated in the actual struggle, which became the core of the anti imperialist leadership in Tianjin at that time

Highlight: three skin culture is the accumulation of material and spiritual wealth related to fish skin, animal skin and birch bark created by northern minorities in their long-term life and production practice. It takes the fish skin culture of Hezhe nationality, the animal skin culture of Hezhe, Olunchun, Ewenki, Daur and the birch bark culture of these nationalities as typical representatives. It is a regional culture with distinctive national characteristics based on fishing and hunting economy, and also the core content of northern fishing and hunting culture 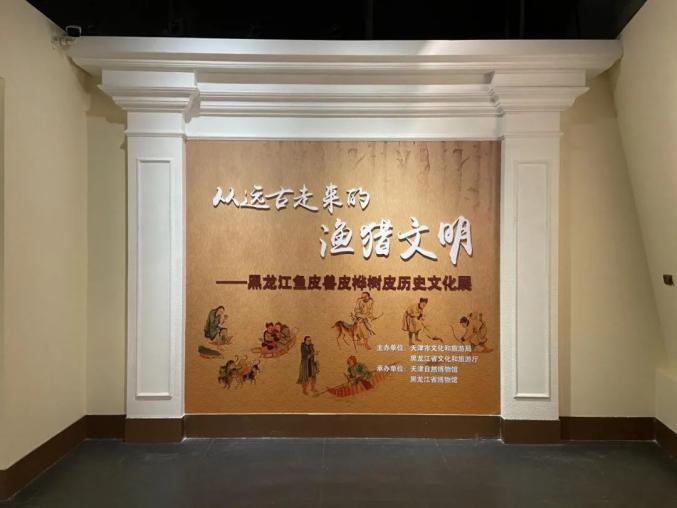 The Museum of Li Shutong’s former residence, together with Tianjin Li Shutong Hongyi master Research Association and Tianjin Fine Arts Center, jointly held the new “painting collection of nursing students” to draw civilized stories – an exhibition of paintings by teachers and students in commemoration of Li Shutong’s 140th birthday. With the teacher-student paintings of Tianjin Fine Arts middle school as the carrier, Li Shutong’s idea of cherishing well-being and loving life is actively spread, modern social civilization is advocated, and the 140th anniversary of Li Shutong’s birth is commemorated

Highlights: the Pingju “Xianglinsao” is adapted from Lu Xun’s original work “blessing”, directed by Li Jianmin, and starred by Wang Yunzhu, a national first-class actor, a municipal inheritor of intangible cultural heritage and a descendant of Liu school. The drama maintains the traditional style of Pingju and highlights the performance characteristics of traditional opera. Wang Yunzhu, who plays Xianglin’s sister-in-law in the play, excellently inherits the vigorous and clear singing style of Naishi Ma Shuhua’s “Liu school”. Her performance is full of tension, especially in the last scene where Xianglin’s sister-in-law is poor and destitute. She recalls her tragic experience in her life and the long aria of complaining about the cruel feudal ethics, which gives people a strong artistic appeal, She excellently completed the shaping of Xianglinsao, a tragic image engulfed by feudal ethics, leaving a deep impression on people

Highlights: five research and learning activities of exhibition hall exploration + interactive classroom of Education Center have been set up for teenagers. Through the exhibition hall exploration + Education Center interactive classroom research form, enhance the understanding and love of young people to marine knowledge. For the parent-child families, five ocean picture book reading activities with manual interaction were held. It is specially designed to set up an interesting ocean picture book reading guide course for the baby’s family, and cooperate with the parent-child interaction to close the parent-child relationship, so as to stimulate the baby’s desire to explore ocean knowledge

Highlights: with popcorn as the main element, we design and create a special time train themed Meichen, including three theme interactive areas of delicious food, time and toys, and launch welfare activities such as free renewal of popcorn bucket with the new version of bear haunting, so as to improve the sense of participation and experience of tourists

Highlights: in 2021, Tianjing Happy Valley’s second spring festival activities will introduce the “Yin Yang master” IP, create a number of photo punch in areas, add blessings to artists, and interact with NPCs in the whole park to provide tourists with a spring gathering